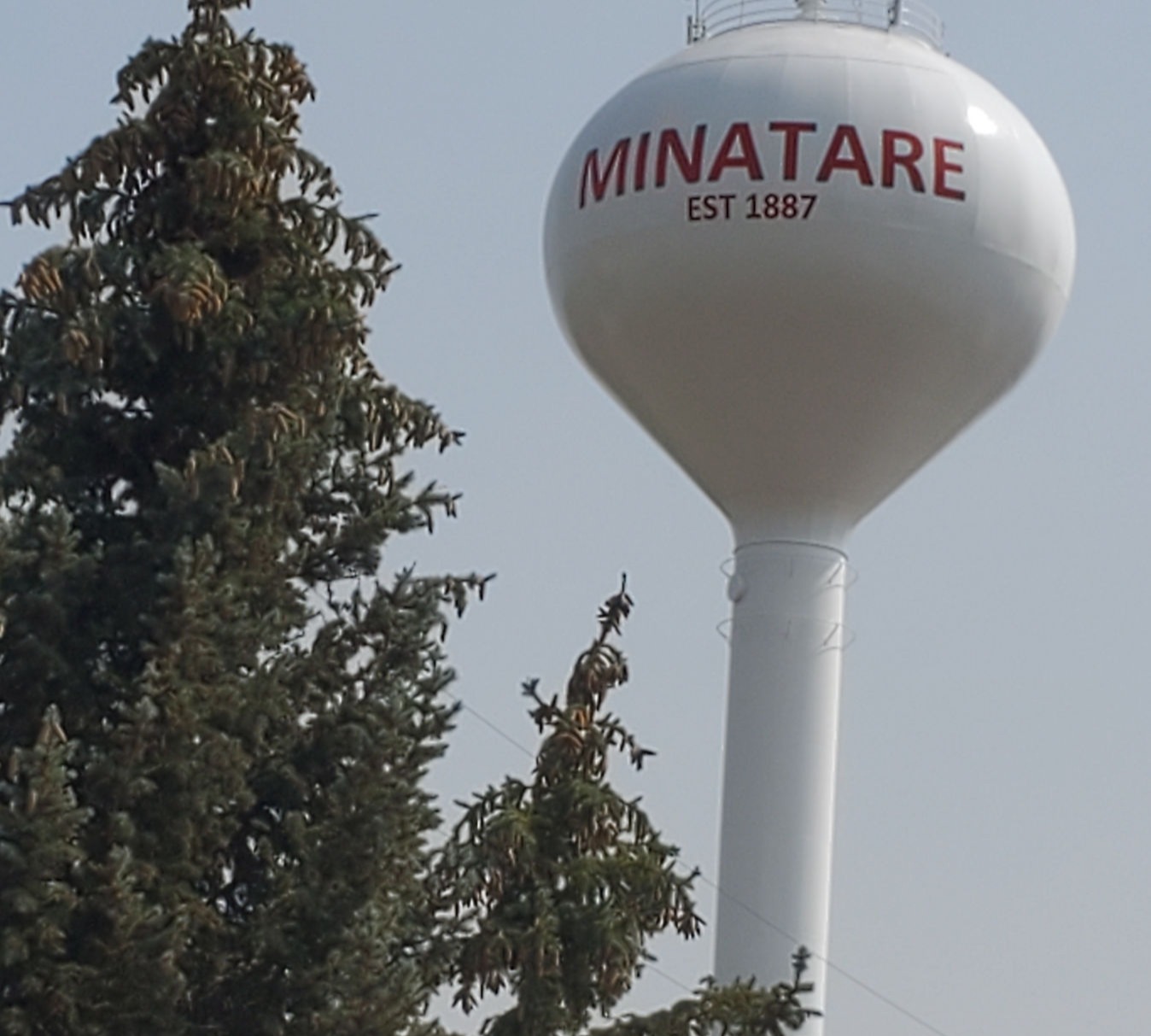 History and origin of our name  'Minatare'

Indians once claimed this area as hunting grounds. According to local legend, a sub branch of Sioux called "Minnataree" were among those that made forays along the river.  Rut marks in the meadows east of town suggest the possible route of Mormon hand carts as they crossed the plains in 1847.

Shortly after Nebraska became a state, George W. Fairfield was sent to survey the land from York west to Yellowstone.  The natural beauty and availability of good water and soil made this his choice of all he surveyed.  In 1885 he filed claim to land at this location.

Fairfield established a "land locator's office" in Sidney near the Union Pacific depot, met each train, talked with land seekers, and helped them locate a homestead near his proposed town of "Tabor." The town consisted of a "soddie" building which served as the Post Office and a general store, also included were 3 or 4 houses. After choosing a site, they would journey back across the Camp Clarke Bridge to Sidney, county seat for the giant Cheyenne County at that time, to file their claims.

Early residents showed real foresight when, in 1887, they met and organized the Minatare Canal & Irrigation Company, the first such project in the area. Built mainly through the efforts of people like Theodore Harshman and his large family, who dug more than half the ditch themselves, it was constructed with little or no money. Lumber for bridges and headgates was hauled from the Wildcat Hills and sawed lumber from the Pine Ridge. The first water was turned in on August 15, 1888.

When the Burlington Railroad arrived in 1900, it missed the town of Tabor, which consisted of a sod post office, general store, and four houses. So Tabor shifted its location and changed its name to "Minatare", an Indian word meaning "clear water."

A District Two School system, organized in 1887, was first held in a dug out, later in a sod house, and eventually in a four room community hall. In 1897 the present district was formed by combining schools at Minatare, Red Top, and Fairview which developed into the K-12 system that we enjoy today. As director Charles Brackman wrote, "After the town was established it was apparent the school ought to be moved. I favored the idea provided there would be a place where the country children could stable their horses."

In those days there were no trees to be found anywhere except for three giant cottonwoods near Minatare. These famous land marks still stand today. According to one tale, a girl who lived some distance north of town had never seen a tree, so for her sixteenth birthday her father brought her to town to view them.

Minatare was Scottsbluff County's first voting place and the precinct was named Tabor.

Minatare's first newspaper was the Minatare Trumpet established in 1887 and later became the Minatare Free Press.

A two-story brick schoolhouse built in 1912 was replaced in 1955 with the present elementary structure. The High School was erected in 1926.

The area has seen many changes. Corn (originally shipped into the area) is one of the main exports today; ninety percent of Great Northern beans grown in America come from the North Platte River valley. Sugar beets, first introduced by Fairfield, remain a standard crop. There are still a few native hay meadows, but most have given way to cropland.

A sugar factory, built in 1926, provided a strong financial atmosphere. The town reflected this prosperity with a full array of shops, businesses, and professional offices with a peak growth in the 1940s. Following its shutdown in 1948, the town suffered and has not regained its earlier population base.

Otto Juergens bought ten head of Shorthorns to start his own cattle herd in 1886. Since then cattle have been an important industry. In 1956 the old sugar factory site became a feed lot, with a second lot established east of town. There are also many cow/calf operations located nearby.

Dotted among the patchwork of cropland is another industry, OIL. The first oil well north of the North Platte River, discovered in 1964, was located near Minatare.

Established for irrigation purposes, Lake Minatare provides a sizable recreation area that serves as a game refuge during the winter and sports the only inter-marine lighthouse in the United States.

Located about half way between Chimney Rock and Scotts Bluff National Monument, Minatare offers residents the pleasures of small town living while having access to many city facilities in nearby Scottsbluff.